In the first week of my Christmas UK holiday I have had seven mince pies. That’s one per day. Five of those have been in different locations. My first munch was at a Carol service at St Helen’s Bishopsgate in central London. This centuries-old church has excellent acoustics and the small choir and soloist needed no amplification for their voices to ring out above the hundreds of singing congregants. After singers concluded the evening with “O come, all ye faithful” servers brought round spicy mulled wine and mince pies. Yum. 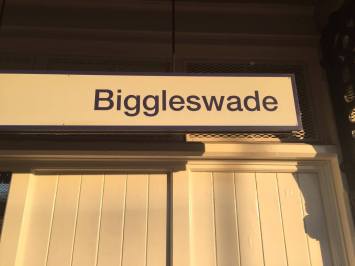 My next mince pie venue was in the little village of Biggleswade. Where? Yes, that’s what several long-time London residents asked me too. Biggleswade is in Bedfordshire at the end of a countryside one-hour train journey from King’s Cross Station. It’s quiet, but growing, assured my cousin, who has lived there for 30 or so years. And in fact a long time ago there was “The Great Fire of Biggleswade”. Doesn’t quite have the same ring to it as “The Great Fire of London”. Never mind that. My cousin’s home-made mince pies in her bright home filled with Christmas decor and family memories were so yummy I had two of them.

END_OF_DOCUMENT_TOKEN_TO_BE_REPLACED 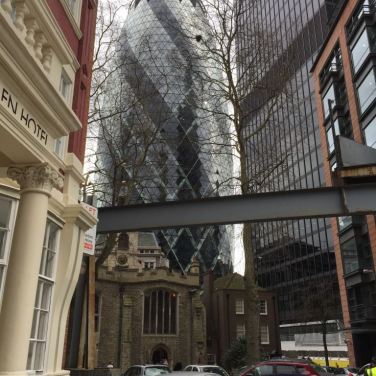 On two recent trips to two vastly different continents I had the pleasure of visiting two very old churches: St Helen’s Bishopsgate in central London, UK, and Grahamstown Baptist in the Eastern Cape of my home country South Africa. “Old” in the UK does not mean the same as it does in South Africa. While strolling around St Helen’s trying to establish what century it dated back to, a helpful gentleman manning the book table inside told me it was built in the 1100s. Grahamstown Baptist, conversely, was commissioned a trifling 192 years ago. But an-almost two-centuries-old edifice in SA is nonetheless impressive.

During those intervening centuries, the city has grown up alongside those older sanctuaries. I was particularly struck by the contrast of the old stone Anglican building with the shiny glass structure of the “gherkin” directly behind St Helen’s. St Helen’s would probably have been fairly grand in 1100 but is now dwarfed by the towering marvel alongside it. And yet both old and new are appealing in their own way, especially when viewed together. Set side by side like that gives an impression of the vibrancy of life – past and present – and therefore future. 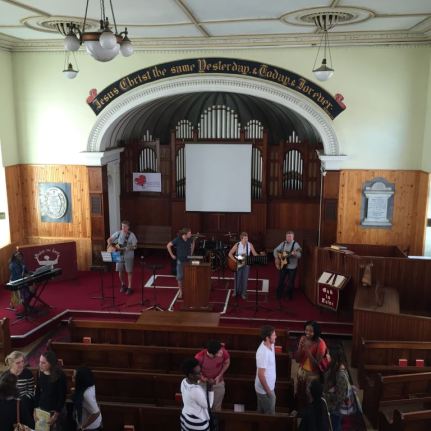 Grahamstown doesn’t boast the same level of architectural progress (would a Mugg & Bean jostling for space next to a big KFC count?) and in fact seems a somewhat neglected hamlet structurally speaking. See Roxanne Daniels’s amusing post on the area’s enormous potholes. But students from Rhodes University do cross the church’s threshold. Students who cogitate upon the latest scientific and social ideas. So there is evidence of life here too – past, present – and therefore future.

There are words printed across the archway inside the Grahamstown Baptist sanctuary. They read: Jesus Christ the same yesterday and today and forever. How meaningful I thought as I viewed these words. Meaningful because, as with St Helen’s, here I was attending a service in a sanctuary in company with the ghosts of people past, the warmth of people present, and the promise of people future. And Jesus, the very reason for these two churches, had been there all along, and promised to continue.