Trainspotting the movie was screened in 1996. Twenty-odd years later, in 2017, T2 Trainspotting was released starring the same character actors Ewan McGregor, Ewen Bremner and Johnny Lee Miller. The story in this second film is a true sequel, set realistically 20 years after the first one. It explains why Renton (Ewan McGregor) ran off with the money he did all those years ago, depicts Simon’s (Johnny Lee Miller) and Begbie’s (Robert Carlyle) reactions to that event and to Renton’s return to Edinburgh, and how the comical-looking Spud (Ewen Bremner) comes to write ‘wee stories’ that evolve into the book Trainspotting (written by Irvine Welsh). Important themes in the first story are flagged in the second, many giving plausible reasons for why the characters turn out the way they do; things such as the scene with Begbie’s drunken father, and character deaths (baby Dawn and Tommy) in the first story. In this regard the sequel is clever and very satisfying. It ties up loose ends in a neat conclusion.

The present-day story in the sequel is also believable, depicting the characters speaking in Scottish accents and experiencing some of the same old struggles with politics, money, crime, drugs, environment and relationships, albeit in a changed Scotland. I read the book Trainspotting last year and struggled through the Scottish dialect and stream-of-consciousness-type writing. But this style, combined with a mix of hilarity and serious issues, made for a compelling story, and the style is well-replicated in T2 Trainspotting. True to the book, the characters’ vocabulary in this film is swimming in expletives – but only at the beginning. The opening lines are used to set the scene and then the swearing thins out, making for more palatable viewing.

I did find the reliance on the past in T2 Trainspotting a bit irritating and got bored with the ‘good ol’ days’ theme. The film is not a standalone and viewers would need to know the original story to fully appreciate the second. The film is entertaining, though, and is very well acted.

Two South African films open at cinemas across South Africa on Friday 28 November. They are Spud 3: Learning to Fly and Leading Lady.

In Spud 3, Troye Sivan stars again as schoolboy John Milton (Spud). At the beginning of this year of his life, Spud is faced with losing his much-needed scholarship to the private school he attends if his performance and behaviour don’t improve. On the advice of his teacher and friend, The Guv (John Cleese), Spud makes a list of things he can do to keep his scholarship and then sets about doing them.

One by one, his plans fail – from short-lived romances to a dismal performance at the school play. Spud’s only remaining hope is to run for prefect. His decision to do this causes trouble amongst the Crazy Eight (which comprises only seven boys) and the relationship with his closest buddies is tested.

On top of all these troubles, Spud’s mad family goes from bad to worse as his father leaves home and starts a bar to try and make a living. 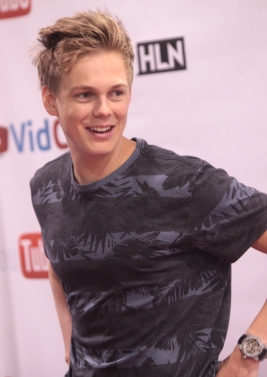 New to Spud, Caspar Lee takes the role of Garlic in the third Spud movie. He is known for his videos on YouTube and has over 3 000 000 followers. Photo: Gage Skidmore.

In romantic comedy Leading Lady, aspiring actress, Briton, Jodi Rutherford (Katie McGrath), visits a farm in South Africa in the hopes of getting into character for an Afrikaans role she is preparing for. She meets handsome farmer, Kobus Willemse (Bok van Blerk) and his odd family, and ends up helping them and the community prepare for the annual nativity play. 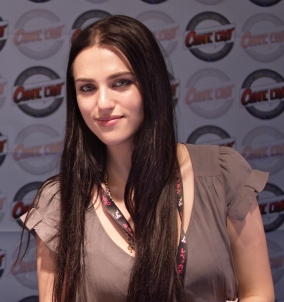 Both films are light-hearted, character-driven entertainment, free from angst and political agenda. This is a good thing, given South Africa’s often dismal public affairs outlook. It was particularly poignant given the fact that half way through the pre-screening of Leading Lady I attended, the centre in which the cinema is held had to be evacuated! (For a false alarm I later learnt).

But this harmless fun isn’t enough to make up for the inadequacies in the two movies. Despite their quality production both Spud 3 and Leading Lady seem to suffer from small camera angles – no sweeping shots and large scenes – and stilted action. Leading Lady in particular has too many close-ups of, albeit attractive, Katie McGrath, which I found annoying after a while.

And in Spud 3, the lack of scenery and big numbers of people (which would be normal in a school setting), felt suffocating and unnatural.