Why You Should Watch Aladdin

The children’s film, Aladdin, released at cinemas in South Africa

recently. It is based on the story Aladdin and the Magic Lamp and explores the themes of power and desire. The clever, satisfying ending makes the moral of the story clear for viewers: Your motives are powerful; be careful of them because, unchecked, they can lead to your destruction.

For parents keen to expose their children to films and stories that provoke interesting, worthwhile discussions I recommend Aladdin. But parental guidance is advised. This 2019 version is very similar to the 1992 animated one – funny, endearing and entertaining. However, this year’s film stars real people. Without the barrier of cartoon characters the romance between Aladdin and the princess Jasmine seems inappropriate for very small children. (Of course, this point is mild when you compare it to one of the older written versions of the story. In the latter, Aladdin spends the night with the princess after having lured an earlier suitor out of the way!) 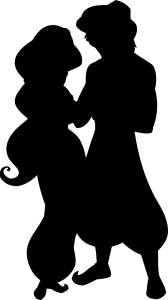 Briefly, the story Aladdin opens with an unlikely hero: a poor, fatherless, young thief named Aladdin. The antagonist is a powerful man called Jafar, counsellor to the country’s Sultan. Jafar wants the Sultan’s powerful position for himself. Desire (for position and power). Aladdin – to put it crudely – wants the Sultan’s daughter (Jasmine) for himself. Desire (for riches and love). The source of empowerment in the story is a supposed magic lamp which contains a genie who is able to grant the lamp keeper’s wishes. Jafar and Aladdin vie for the lamp and this creates the conflict in the story.

Whilst the genie has the power to grant the wishes, the genie’s power is directed by the wishes and desires of the one who owns the lamp. He is enslaved to whoever commands him. As the story progresses it becomes clear that Genie’s enslavement is a picture of what our own desires do to us: they gradually enslave us.

As the struggle intensifies both Aladdin and Jafar become more desperate to have their thwarted desires met. And their desires escalate; instead of wanting only to be sultan Jafar eventually wants to become the most powerful genie in the land. (Think Saruman in The Lord of the Rings: The Fellowship of the Ring). For his part Aladdin is tempted to go back on his word in order to get what he wants.

Conniving and betrayal make up both Jafar’s and Aladdin’s journeys until the final scenes of the film see Jafar’s wish to be the most powerful genie coming true. But the benefits of Jafar’s new position (in particular) don’t quite live up to his expectations!

The Christian Bible essentially teaches the same idea. Romans 6:16 says: Do you not know that if you present yourselves to anyone as obedient slaves, you are slaves of the one whom you obey, either of sin, which leads to death, or of obedience, which leads to 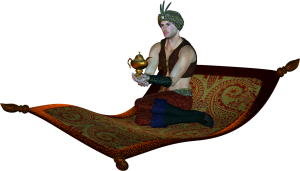 Watch Aladdin with your children and discuss how the different characters (including Abu, Aladdin’s monkey!):