In the latest film version of Spider-Man the superhero is mentored by Iron Man and battles Vulture using a mixture of a specially designed suit and human integrity. This mixture of the ‘super’ and the ‘human’ flows throughout the film. Spider-Man is a geeky teenage boy, Peter Parker (Tom Holland), who has an even more geeky friend, Ned (Jacob Batalon). Iron Man has another life as a businessman called Tony Stark (Robert Downey Jr), while Vulture also has an ulterior, human, identity as Adrian Toomes (Michael Keaton). 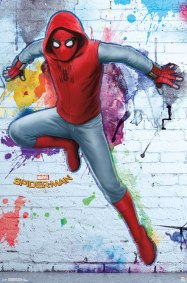 The relationship between Stark and Parker is handled with humour, and Parker’s efforts as a superhero feature enthusiasm coupled with inexperience. The result is a much lighter handling of the normally dark Spider-Man stories. I welcomed this. Families, too, with children and young teenagers will enjoy the more relatable characters. Modern-day special effects such as cell phones and computer technology are juxtaposed with other-world weaponry and this, too, emphasises the mix of human and super.

But the humour and action does border on the slapstick and I didn’t always enjoy the silliness. Robert Downey Jr and Michael Keaton are pretty good in their roles but Marissa Tomei as Peter’s aunt looks decidedly too sexy for her role and Peter’s flame, Liz (Laura Harrier), is wimpish.

Overall, Peter’s initiation as Spider-Man, and the mix of ordinary, modern-day life with the heroic, make Spider-Man: Homecoming fun to watch. The film opens at cinemas in South Africa on 7 July 2017.

When Joan Smith asked Ray Kroc in words something to the effect ‘When did you start McDonald’s’, there was just a small flicker in his eyes before he answered ‘1954’. That flicker indicated the moment in the film, The Founder, when Kroc (Michael Keaton) lied about the beginnings of the famous fast food chain McDonald’s. Kroc was not the ‘founder’. The developer, yes, but not the founder. That title in fact belonged to brothers Dick and Mac McDonald who came up with the concept many years earlier.

Kroc had been a struggling but optimistic salesman who met the brothers when he sold them milkshake machines. He had been so impressed with their flagship store in California that he persuaded them to go into business with him and roll out more franchise stores like theirs across the USA. But the McDonalds’ conservative stranglehold on progress frustrated Kroc’s ambitions and Kroc managed to override the brothers, buy them out and take the chain to global reach.

That flicker moment also pretty much indicated when Kroc, in The Founder, stepped over the integrity boundary in his personal and business life. As his personal life went south so did his business ethics, and Kroc’s wife, and the McDonald brothers received a raw deal. Kroc is not painted in the film as an all-out baddy, however. His tenacity, business sense, and focus are shown in a way that make you admire him. And the balance between his business success and some unfair (though not technically illegal) dealings is this this film’s strength.

The Founder does not come across as a typical Hollywood ra-ra-America film. I enjoyed the story about how Dick and Mac came up with their simple menu and scientifically developed service offering. How Kroc, with the help of lawyer, Harry Sonnenborn (B J Novak), turned the focus from purchasing franchise stores to purchasing real estate, and how the McDonalds’ focus on marketing to the family was changed by Kroc to marketing that appealed to people’s religious-type passions.

The Founder opens at cinemas in South Africa today 19 May 2017.

In line with Cinema Nouveau’s build-up to the Oscars on 22 February, A Feast of Tales is reviewing six Oscar-nominated films. So far we have featured The Imitation Game and Boyhood. In this post we review Birdman. (Some of the films release in South Africa only after the Oscars so coverage for those will be in retrospect.)

Birdman. Wow. What an experience this film is. The storyline centres around Riggan Thomson (a very aged Michael Keaton) and his staging of a Broadway play. In his younger years Riggan was famous for his role as film action hero Birdman.

In this theatre debut Riggan tries to gain credibility instead for his directing/acting part in a serious play. In doing so he struggles with his former self, with personal relationships, and with his search for significance.

But more than a simple plot Birdman is an experience for the audience. It is almost exclusively filmed inside the theatre building.

Apart from one scene in which Riggan is trapped outside the theatre wearing only his underwear. He is forced to walk through crowds of people and make his entry on cue from the front of the theatre. This, and other elements of the film, is symbolic, and highlights the film’s constant interaction between what is real and what is not.

As Riggan struggles with the voices inside his head and walks the corridors of the building from one crisis to the next, viewers are bombarded with the sound of discordant drums. As the film builds to a climax the drumming is interspersed with harmonious classical music as the character finally begins to resolve his inner conflicts.

The other characters serve to confront weaknesses in Riggan. These include his daughter Sam (Emma Stone) whose doodling on toilet paper raises the issue of humanity’s insignificance; the brilliant but unlikeable actor Mike (Edward Norton) who succeeds only in the world of make-believe; and Lesley (Naomi Watts) whose views of Broadway have not yet been tainted by cynicism.

Birdman is an intense, clever and intricately wrought story that sucks the viewer in. It forced me to concentrate in order to grasp its meaning. When I left the cinema complex I felt the tension dissipating as I stepped from the fake world of the theatre into the real world. Or was it the other way round?

Birdman is on screen at Cinema Nouveau in South Africa, it has been nominated for 9 Oscars. The Oscar Award Ceremony takes place on 22 February 2015. 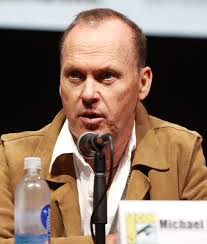