Four things to do in New York

On a recent winter trip to New York I visited four tourist attractions that were super interesting for different reasons.

Inside the New York Public Library

One: The New York Public Library. Why should you visit? Because of the literary, historical, architectural and movie-like atmosphere. The NPL simply reeks of scenes from the film The Day After Tomorrow. As I walked up the steps, nosed about in quiet corridors and soaked up my surroundings in the Rose Main Reading Room, scenes from this – one of my favourite films – flooded my mind. (Although, according to the NPL website, all the scenes were virtually – not actually – created). Apart from admiring the many books and special collections I also enjoyed a free guided tour and information movie about the history, purpose and layout of the library. Interesting note: Most of the people sitting quietly at wooden desks with soft glowing lamps next to them, surrounded by books and more books, were staring at computer screens not book pages.

Two: Ellen’s Stardust Diner. Why should you visit? Because you get entertainment and food rolled into one.

Me at Ellen’s Stardust Diner with a singing waitron behind

Ellen’s Stardust Diner is a kind of training ground for performers trying to make it to Broadway (it’s situated on Broadway itself). And the performers all work as waitrons at the diner. So, while serving you your burger or mac n cheese, the waitrons will break into song, strut around on a platform behind your seat, or drape themselves over you while singing He had it coming from the musical Chicago. And you don’t have to book.

Three: The New York Historical Society. Why should you visit? Because of the interesting way the history of New York is portrayed. Probably aimed largely at children, the layout of the exhibits does your thinking for you. Which is nice if you’ve just flown 17 hours to get there and don’t know much of the history of this amazing city. But it still gets you questioning and pondering. In the Vietnam exhibition, for instance, my husband spent ages chatting to an old guy who had actually fought in Vietnam and was sad about what was NOT included in the display.

Four: See Come From Away on Broadway. Why should you go? Because of the character-driven, funny, warm and gripping story of how thousands of people were diverted to the small Canadian town of Gander during 9/11. It was brilliant. And now I want to visit Gander. 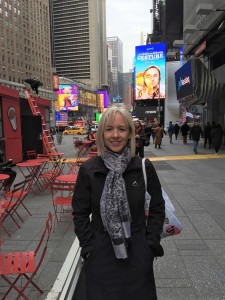 Times Square, on our way to Broadway