Holding onto Life: By Remembering the Dead

Much in our existence revolves around “holding onto life”. Taking holidays, doing things we love, remembering those who have died. I pretty much did all three of these activities together recently when I holidayed at Le Canonnier, Mauritius, walked The Coffin Route in England’s Lake District, and read Truman Capote’s In Cold Blood while on those trips. 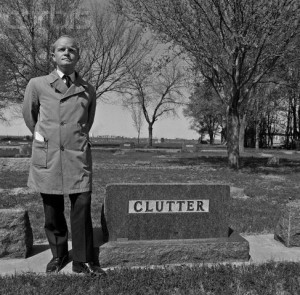 1967, Holcomb, Kansas, USA — Author Truman Capote poses at the grave of the murdered Clutter family, made famous in his novel and in the film. — Image by © Bob Adelman/Corbis

Capote’s book, which was published in 1966, is termed a “non-fiction novel”. Today the equivalent term might be “creative non-fiction”. The genre describes a story that is essentially factual, but written to read like a novel as opposed to, for example, an essay or a newspaper article. In Cold Blood relates the true story of the murders of four members of the Kansas-based Clutter family by criminals Perry Smith and Richard (Dick) Hickock. Readers therefore begin the book knowing the outcome. But this doesn’t detract from the product. Capote’s unique descriptions, careful character portrayal, and flowing style kept me totally engrossed – even through sections that seemed obviously lifted from official reports.

At the end of the book the reader is taken to the simple graves of the four Clutters. It is merely a “single gray stone”, which lies “in the far corner of the cemetery”. Without Capote’s book many people, myself included, would never have known or cared about the Clutters, or their murderers, and the senseless ending of their lives. In this way Capote helps us “hold onto life.”

I started In Cold Blood while enjoying a week of mild April sunshine (and short rain showers) at the Beachcomber resort of Le Canonnier on the northern coast of Mauritius. This type of holiday – a Beachcomber all-inclusive package – is like being in paradise. Calm seas, copious food and relaxing activities lull the mind and body into believing that nothing outside the resort gates exists. But even paradise has a dark history of life and death. I joined a “Beautiful Story Tour” one afternoon and heard a few facts told in a creative way. Le Canonnier, our tour guide explained, was the site of a military garrison in the 1800s. Cannons, an ammunition building, a large tree which was originally the fort of 50 soldiers, and a now-defunct lighthouse bear witness. And beyond a hedge, nestled in the thick, green grass the grave of a young doctor can be glimpsed. This doctor had treated indentured labourers who disembarked a ship just south of today’s resort, before contracting one of his patient’s illnesses and succumbing. I would never have noticed the grave – the remaining indication of a life having been lived – if our guide hadn’t pointed it out.

The life of English poet, William Wordsworth, is much more well-known to me than that of this fateful Mauritian doctor, and therefore easily remembered. This is of course due to the former’s published and widely loved poetry. But also to the careful memorialisation of his English Lake District home, which I visited on a trip in early May. What I saw in fact detracted from the romanticism surrounding the poet, portraying as it did the “non-fiction” side of this “creative” writer’s life. As charming as the cottage may seem from the outside, inside it is dark, cold, smoky and wonky. No wonder William and his sister Dorothy loved their garden so much.

My daughter and I walked to Wordsworth’s home in Grasmere from Ambleside via “The Coffin Route”, a rough woodland track away from the main causeway where the sight of dead people may have caused offence.

Funny how this route is now the most delightful one for walkers wanting to escape the realities of daily living by enjoying nature.

Remembering the dead on these trips was certainly an enjoyable “holding onto life” for me.

Lynn Easton recently invited me to attend the 16th anniversary celebration of her family business, Afscot Financial Services. What a delightful occasion the day turned out to be. Colourful eats, a soothing foot massage, an intimate home environment, cheerful conversation and the strains of live banjo music all made for a lovely experience. But what really made my time at this Durban venue special was a tour around Lynn’s gorgeous garden. Full of roses, orchids, bonsais and bromeliads, this sanctuary is the handiwork of Lynn’s very talented and hardworking son, James. 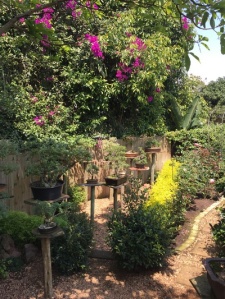 James is a recovering drug addict and a fine example of a young person who has since channelled his energies into the creation of a masterpiece. James puts in hours and hours of work a week and enters the garden into gardening competitions. He is so painstaking with his efforts that he even cuts the verge grass with scissors! While mum, Lynn, hovers over him with a light, James prostrates himself into all hours of the night, trimming the lawn at the base of the rose bushes into perfection.

This particular lawn is the only one on the premises. The rest of the garden is made up of beds, landscaped into unique areas. I was delighted by the beautiful and varied orchids attached to trees, the bonsais displayed on wooden stands at different heights, the rose bushes planted in honour of special people, and the creative rockeries planted with rare bromeliads.

By Lynn’s own account, she is a “slave” to both her husband (in their hospitality industry insurance business) and her son (in the garden)! But she does it gladly. With the couple’s daughter also involved in Afscot Financial Services, this is a true family business. This business and its garden is a beacon of beauty in the Durban community.