Amy: my opinion about her has changed

Amy is the opening feature of the European Film Festival which will be screened at Cinema Nouveau in South Africa from 6 to 15 May. The first screening is tonight at 08.30pm.

The documentary uses what looks like amateur footage painstakingly put together to present a sympathetic portrait of the singer. Scenes shown stretch from that of a little dark-haired girl, to a happy, chubby-cheeked teenager, through to the final sad image of a small, lifeless body being stretchered into an ambulance.

END_OF_DOCUMENT_TOKEN_TO_BE_REPLACED

EUFF’s Concrete Night is well-made but uncomfortable to watch 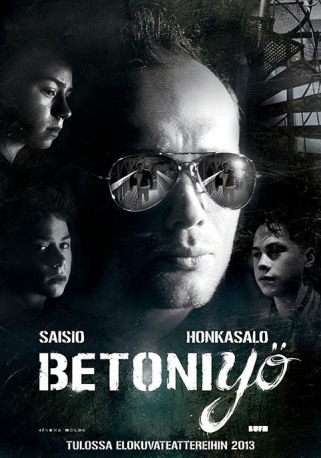 The film poster with its original film title. This 2013 film shows in cinemas in South Africa as part of the European Film Festival. Photo: creative commons

The 2015 European Film Festival celebrates women through the theme A Woman’s World. In Concrete Night, it is director Pirjo Honkasalo who is celebrated.

The film centres around a teenaged-boy named Simo who lives with his single mother and an older brother in a miserable-looking apartment block in Helsinki, Finland. Inner city shots, night filming, graffiti and grime, and relentless rain add to the depressing atmosphere of the story. It certainly belies the film’s given description which contains the words “beautiful Helsinki”. In fact, I caught myself thinking I wouldn’t live in Helsinki if I was paid to. But I think this is what Honkasalo intended: to create a setting that echoed the characters’ hopelessness.

The story takes place over the course of only one night and serves as a journey of sorts – Simo’s passage into adulthood. According to his brother, adulthood or future is one in which humans don’t matter, and one that is better lived without hope. Taken too literally by immature Simo, this advice has devastating consequences for the young man, and proves excruciatingly untrue for his brother.

Concrete Night is not an enjoyable film. It is strange and confrontational, and I found myself glancing at my watch hoping it would end. But the ending did bring the difficult elements of the story into sharp focus. I was left feeling depressed but with an appreciation that Concrete Night is a well-made film.

Concrete Night screens at Cinema Nouveau (in Durban) on Friday 15th May at 5.30pm.

For its second edition, the European Film Festival (EUFF) (#EuroFilmFestSA) celebrates women through the theme A Woman’s World, with a selection of films that feature female directors, strong female characters or women-related stories.

This year’s EUFF features 12 internationally-acclaimed films from 8 to 17 May, representing the best of European cinema and never before screened to South African audiences.

In Durban, the festival will take place on Friday 8 to Sunday 10 May and Friday 15 to Sunday 17 May at Cinema Nouveau – Gateway (Gateway Theatre of shopping (Expo/Explore Floor), 1 Palm Blvd, Umhlanga Rocks).

For more information about the EUFF 2015 FILM SELECTION, visit:

The 12 internationally-acclaimed films lined up for EUFF 2015 – A Woman’s World – include:

The Hunt is excellently hard-hitting

The Hunt is a 2013 Danish film that was initially screened in South Africa in May 2014 as part of the European Film Festival at Cinema Nouveau. It won a number of awards at the Cannes Film Festival and others, including best actor for Mads Mikkelsen who stars as Lucas in this hard-hitting movie.

Lucas is a kindergarten teacher in a small town in Denmark. He is loved by the little ones and is seen having lots of fun with them. In his private life Lucas enjoys fun of a more raucous kind with a group of men, all of whom have clearly been friends for a long time. Swimming naked in Denmark’s freezing climate and hunting deer are among the group’s activities.

Lucas is also a divorcee with a teenage son, Marcus (Lasse Fogelstrom), whom he longs to see. His longings are rewarded by Marcus’ eventual wish to come and live with his dad.

Before this happy reunion can come to pass, however, things change dramatically for Lucas. Through a series of simply portrayed events Lucas finds himself accused of child molestation. And it is here that we see the film’s title “The Hunt” coming sharply into focus. From colleagues, to parents, townsmen to friends, most of the people in this small town turn on Lucas with a violence that is hard to watch. Police and the law appear only as a vague accusatory presence.

It is the personal betrayal, the stumbling, scuffling attacks on this man’s dignity by people he knows that are so deeply hurtful, and harsher than any “action” film I’ve seen. A line spoken by Lucas’ best friend goes something like this: “There’s evil all around us but if we stay together we keep the evil out.” The evil without (us) or the evil within (us), I wonder.

The Hunt is an excellent and deeply disturbing portrayal of cruelty and human nature. As intense as it is to watch I do highly recommend it. It opens at Cinema Nouveau Theatres in South Africa on 3 October.