Chess Prodigy is Queen of Katwe

Queen of Katwe is a Disney film directed by Mira Nair and based on a true story. The “Disney” logo at the beginning of the film conjured up for me images of a sentimental, happy-ending movie that might potentially slant the “truth” to satisfy its western audience. Well, I certainly did shed some tears. And I felt happy afterwards. And, yes, I am a western audience. But I also think Mira Nair did well to bring to the screen this small, true story about, of all things, the pleasures of chess. 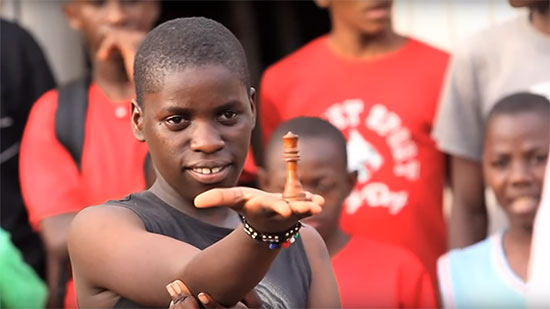 Queen of Katwe revolves around a struggling family in Uganda, a man who works as mentor to underprivileged children, and the surprising rise of one young girl to chess prodigy. Phiona Mutesi (Madina Nalwanga) and her siblings struggle to survive in the Ugandan city of Katwe. Their mother (Lupita Nyong’o) is a hard-working, no-nonsense, principled woman who teaches her children responsibility and self-pride in the face of great hardship. While selling corn on the chaotic streets of Katwe one day, Phiona follows some other children to a room where “coach” Robert Katende (David Oyelowo) is teaching chess. Poorer than even the poor children in the room, Phiona has no education and yet takes to the game with a natural talent.

The strategies and thought processes that go into the game of chess become a picture in the film for how the players should deal with life. And vice versa; coach Katende actually uses his pupils’ difficult lives to spur them on at play. Coach himself sacrifices his own career as an engineer to mentor the children. This aspect of the story certainly seems credible if the notes and appearance of the real characters at the end of the film are anything to go by.

Lupita Nyong’o is particularly good in her role as mother and some of the children’s parts are delightful to watch. A drawback to the film is its use of the English language with “Ugandan” accents. If it had been filmed in a local language with English subtitles I think it would have seemed more authentic and reached the right audience. Despite this, I enjoyed the unique chess aspect of Queen of Katwe, and how it became an unusual highlight in the lives of struggling people.

Queen of Katwe, which was filmed in South Africa, opens in SA at Ster Kinekor theatres on 14 October 2016.