Denial is based on the book History on Trial: My Day in Court with a Holocaust Denier by Deborah E. Lipstadt. The cast of main characters is all British, with the exception of one South African, Caren Pistorius, who plays a junior paralegal. Even the one American character in the story, Lipstadt, is played by a Briton, Rachel Weisz.

The story revolves around exactly what the title of the book proclaims: a 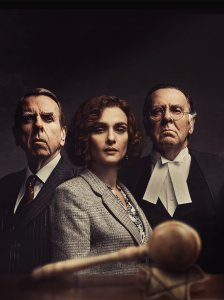 day in court. Historian, Lipstadt, is accused by holocaust denier David Irving (Timothy Spall) of defaming him in one of her publications. Passionate about her subject, and Jewish herself, Lipstadt decides to go to court, rather than settle out of it. She is appointed a British legal team who takes on the case pro bono (although funding needs to be raised to pay costs). Despite its brilliance the team’s seemingly objective, very methodical approach to the case conflicts with Lipstadt’s strongly held – and voiced – values on her subject. Much of the story actually revolves around Lipstadt’s own coming to terms with their methods, one of which involves her not even taking the stand and thus remaining silent throughout the trial. This goes against her grain and is an exercise in “self-denial”, a line which appears in a conversation in the film.

A major aspect of the story is the depiction (and explanation) of the British legal system which is different to the American one. Whilst solicitors do the behind-the-scenes work, explains solicitor Anthony Julius (Andrew Scott) in one scene, barristers are the ones who argue the case in court. In Denial Tom Wilkinson plays Richard Rampton, the barrister. Viewers are privy to the team’s decision to argue the case by proving Irving to be a racist, anti-Semite and a wilful liar. This tack requires a great deal of discipline, a huge amount of research (performed by an enormous team of historians, professors and students), and a firm decision not to defend the holocaust by putting survivors on the stand.

Tom Wilkinson performs his role as barrister Richard Rampton with delicacy and balance. Rampton approaches his job with scientific precision, but also manages to connect with his emotional and upset client, Lipstadt. He consciously avoids eye contact with David Irving in court, a tactic designed to unsettle the opposition. But when the court case is over, Rampton continues to ignore Irving thus revealing his true feelings. This subtle display of emotion made me weep.

Irving is well-portrayed as an ill-informed radical with his own agenda. He reminded me of purveyors of other conspiracy theories, proponents of which unfortunately get lots of attention in the media while the plodding, scientific, historical facts get overlooked. This may in fact be what happens to this film. Denial is not an action film. It tells a relatively small story despite its weighty subject, and may therefore not attract large audiences. I, however, was completely absorbed from beginning to end and highly recommend this tightly acted, carefully portrayed film.

Denial opens at cinemas in South Africa on 10 February 2017.

There’s something missing in Spectre

In true James Bond fashion, Spectre, the newest Bond movie starring Daniel Craig, opens with a nail-biting, visually arresting scene. Set in Mexico City on the Dio de los Muertos (Day of the Dead), Bond is seen tracking his prey while weaving through streets filled with people dressed as skeletons. A spectacular explosion ends the first scene but not before Bond overhears the name of the man he must spend the rest of the film trying to defeat: the Pale King.