In preparation for a cycling holiday I am due to go on later this year I decided to sign up for ‘Ride’ classes at the gym. I haven’t cycled regularly since I rode my bicycle to school many years ago so was a bit nervous. Reactions like ‘Are you sure you can manage?’ from friends didn’t help. Suggestions were given like using a stationary bicycle at the gym and doing my own thing at a more moderate pace instead of attending a class. But that seemed far too boring. So I went ahead and booked. On the online class booking app I was instructed to ‘choose 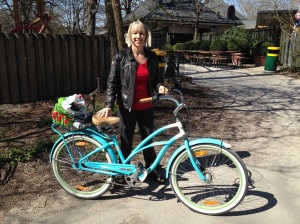 my position’. I chose the bicycle as far away from the instructor as I possibly could. I fished out of my cupboard my brand new, frightfully luminous pink, disgustingly revealing padded cycle pants. When I added the demure little skort over the top I looked suitably modest. I was ready. Let the Ride begin!

Now, before I let you know how the Ride went, I’ll talk a bit about books as no doubt you’re wondering what books have to do with bicycles.

Well, when contemplating a boring session on a bicycle by myself, my helpful friend suggested I listen to an audiobook while pedaling away. Good idea! I had recently finished listening to the audiobook The Lioness of Morocco by Julia Drosten. This book would’ve kept me in the saddle for almost 13 hours – a decent amount of training for a holiday I would say. But would it have kept the boredom away? On the whole, yes. It’s a charming romance set in a place and era I know very little about. The main character is a likeable, although 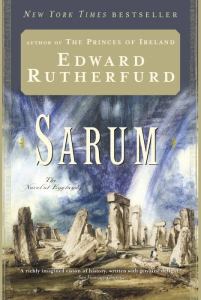 rather simplistic, Englishwoman. What I did feel got a bit longwinded was the ‘saga’ nature of the story. The family and their children, and children’s children got me wondering when it would end – a bit like a gym cycling session? Another saga I’d recently finished was the historical novel Sarum by Edward Rutherford. In this ‘novel of England’ the story follows five families from 7500 years BC right up to 1985 AD. Eight hundred and ninety seven pages – and about one year – later and I would’ve had calves like a Tour de France cyclist had I listened to that while training.

Well, back to my Ride session. I did pretty well thank you very much and didn’t suffer too much from sore muscles in the derriere the next day. Success! Whether I continue with the classes or do my own thing in the gym, my holiday is approaching and time is short. So, to hasten my training along, perhaps I’ll increase the speed on my next Audible book – Americanah by Chimamanda Ngozi Adichie – and instead of training to a saga, I’ll puff away to a short story. Either way here’s to bicycles and books!