Noddy Comes to (My) Life

One of my earliest memories of books was Noddy Goes to Toyland and Noddy and his Car by Enid Blyton. These were borrowed from the library on several of my family’s fortnightly evening visits there. Too impatient to wait until we got home to read them, I would snatch looks at the pages each time my father’s car drove past a streetlight.

Who wouldn’t want a ‘dear little house’ like this one?

When it came to daytime playtime my enthusiastic reading of Noddy became part of my life. I had been struck, you see, by the ease in Noddy Goes to Toyland with which Noddy moved into Toyland and built a house. I think I also fancied the idea that Noddy had run away from his previous home in search of independence. This independence was especially evident when Noddy hired himself out as a taxi driver in Noddy and his Car. Live by yourself in a dear little house! Earn money by working! Oh yes, this was going to be the life for me. And so I travelled around our suburban streets on my tricycle (which had a passenger seat), pretending I was Noddy in his car. And I moved things around in my bedroom to simulate Noddy’s own house.

But not being able to pipe running water into my own bedroom flummoxed me, and using a basin of water would not have been sustainable. Unlike Noddy, who turned to Big Ears to help him problem-solve issues with his unhappy car passengers, I didn’t ask anyone for help solving my water crisis. Thus ended my pursuit of complete independence. Real life was not so simple after all. 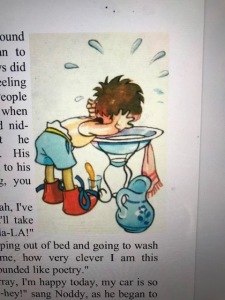 Noddy was a wooden toy, though, a toy, who, somewhat reminiscent of Pinnochio, had been carved by a carpenter. Unlike Pinnochio, who wanted to be a real boy, Noddy wanted to remain a toy. Likewise, I like to think that – even as a child of four or five – I knew that none of Noddy and his lifestyle was or could be real. Noddy was a toy after all and his and my forays into games were just that – games. I simply, and willingly, entered into a ‘contract of make believe’ with my books.

2 thoughts on “Noddy Comes to (My) Life”

Stories and photos from Scotland