The Stories Behind Writers

Aren’t you curious about writers? The faces behind the words you read, what inspired them as writers, who they are, how they write? I know I am. And judging by two films and one series I watched recently so are others. All three focus on writers, their lives, experiences and influences. They are: Agatha Christie and the Truth of Murder (2018 film), Tolkien (2019 film) and Little Women (BBC television series 2017).

Of the three Agatha and the Truth of Murder was the one I liked least. I’m not a fan of Agatha Christie plots. And this film addresses Christie’s own doubts about the predictability of her stories. In real life Agatha Christie went ‘missing’ for a number of days during her career and Agatha and the Truth of Murder is an imaginative story of how Christie might have spent that mysterious time. The writers place Christie squarely in an actual murder case which she is forced to solve. This experience ultimately helps her own writing – or so the story goes. The point made by the film is that an author’s lived experiences informs their writing. 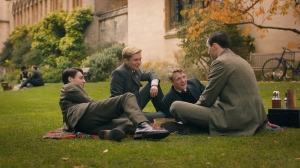 Tolkien makes this very point clearly. In this film, however, what is portrayed may reflect actual events in the author’s life. The film is an in-depth, sensitive biography of the famous author’s formative years and how the many influences in his life ultimately had great bearing on his famous works. His poverty, orphanhood, intelligence, love of language, and desire for friendship all influenced the man and the writer he became. His romance with fellow orphan Edith Bratt, which ultimately matured into marriage was an integral part of his life. And WWI, which cut through everything – his studies, career, romance and friendship circle – profoundly affected the man and writer he became.

Slightly more subtle on the theme of experiences influencing writing is the BBC television series Little Women based on the book by Louisa May Alcott. Of the four sisters in Little Women, Jo March was the writer. She wrote initially because she loved writing. Then she wrote out of necessity. And finally she wrote out of pain, as a way to process the death of her beloved sister, Beth. Jo’s life

Practical Criticism or New Criticism is a branch of literary theory that studies the form of texts. The theory disregards author intention and reader response. There is certainly merit to this approach to studying literature, especially with poems or stories for which the reader has no idea of the author’s intent.

However, I just can’t help wondering… What influences of your life can be brought to bear on the writer you are?

2 thoughts on “The Stories Behind Writers”