Reading: An Entry into Other Worlds

I bumped into a friend and his 12-year-old daughter at a market recently. The young girl, whose pen name is Tamika, enthusiastically told me about a book she’d been reading, Cue for Treason by Geoffrey Treese. Words like ‘Shakespeare’ and ‘Queen Elizabeth’, and Tamika’s excited description whet my own appetite for what sounded like an historical fiction book for children.

Using history as a base for children’s fiction is a wonderful idea. After borrowing Cue for Treason from my local library and reading it for 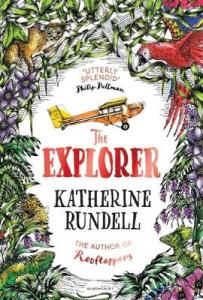 myself I read another children’s book in the same genre, The Explorer by Katherine Rundell. The Explorer is a story about four children whose aeroplane crash lands in the Amazon jungle. There they meet an Explorer who – though unnamed throughout – is reminiscent of Percy Fawcett, the real-life adventurer who went missing without trace while searching for the Lost City of Z (see my previous review https://wp.me/p4c1s1-nS). All the children are transformed by the experience and at least two of them grow up to be explorers themselves!

Like my young friend Tamika, Rundell is enthusiastic about her genre and about reading. Copious historical research as well as a visit to the Amazon made up Rundell’s groundwork for The Explorer. But so too did books Rundell read as a child, books that caused her to be ‘in love with the world of a book’. (Read an interview with Katherine Rundell here https://bit.ly/2vVaEAp). As a writer herself Rundell is wonderfully descriptive. And, like the books she read as a child, Rundell has likewise created in The Explorer a book that easily transports the reader to another realm.

‘The main characters in this book are Kit, Shakespeare, Sir Joseph and last, but certainly not least… Peter.

‘Pete or Peter is accused of a crime, a crime he did indeed do and all the people in his small town know it. The 14-year-old has to escape from home with a few of his family’s pennies and bread and cheese. He has to survive on the road where he meets Kit and then Shakespeare. Kit and Peter learn that the queen will be killed. When Pete becomes an actor and Kit’s friend, they go on their way to warn the good Queen Bess about her murder. Will Pete be kidnapped with all the things he knows? Will Kit have to travel alone? So many secrets, so many lies. Who is a friend, who is a foe?

‘I think this book could have used more description of the characters but I guess everyone can make up their own characters. I mean I’d like to know what Kit looked like. I did love the vigorous verbs. It was a wonderful book and we read it every night. We couldn’t put it down! 70%’.

Tamika, thank you for sharing your review and for your passionate recommendation!