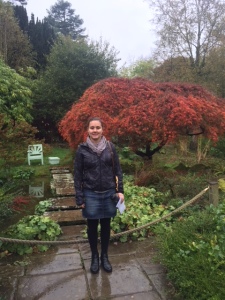 A Japanese Maple in the garden of Chartwell House. With Robyn Turton

As I walked to the post office on a sunny autumn day in London to send off some magazine competition entries, I was reminded of the film The Prize Winner of Defiance, Ohio. This 2005 release starred Julianne Moore and Woody Harrelson and was a lovely based-on-truth story about a mother of 10 who entered competitions and with her winnings saved her family from ruin. The difference between the luck-of-the-draw competitions I had entered and the ones Evelyn Ryan (Moore) went for in the 1950s was the skill required. Ryan needed to write clever, succinct jingles that were better than all the other entrants’ attempts. Judging by the number of times she won she was indeed very skillful.

My daughter and I watched the film on a mobile phone in an AirBnB in Canterbury, Kent. We had taken 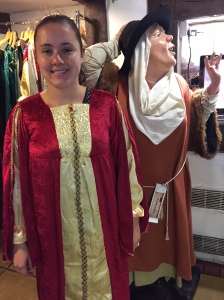 The Wife of Bath & Robyn Turton. Which is which?

off a few days to visit this county and were pleased with the number of other skilled writers we had come across on our journey. The first, on our way to Canterbury, was Winston Churchill. We had visited Chartwell House, the WWII home of this gifted man. Apart from being prime minister of Britain and a decorated military man, Churchill also wrote almost 50 books and was an amateur painter. A tour guide at the house pointed out an interesting comparison. Adolf Hitler, too, was an artist and had applied to study at art school but had been refused. What if, posited the guide, Hitler had been accepted at art school?

In Canterbury itself we of course saw some reminders of the author of the famous The Canterbury Tales – Geoffrey Chaucer. Chaucer is credited with being one of the first people to write in English (albeit in Ye Olde English) and his stories are full of ribald humour and so are appealing today. Somebody who wrote in more ‘modern’ English several centuries later was Charles Dickens whose home was Rochester, another city in Kent. My daughter and I did a walking tour of this delightful old city where we saw landmarks that Dickens himself refers to in many of his works. These included ‘Satis House’ from Great Expectations (properly named Restoration House) and Rochester Cathedral which takes centre stage in Dickens’s unfished work The Mystery of Edwin Drood.

It was lovely to have walked in the footsteps of these real historic literary greats – from Chaucer to Dickens to Churchill. And as I strolled back from posting my luck-of-the-draw competition entries I pondered on The Prize Winner of Defiance, Ohio, who herself – however different – left a literary legacy  of her own.