My London Marathon journey began, of course, some time prior to 23 April 2017, the date of the event. Preparations included plotting the route, packing supplies, wearing the right gear, and liaising with supporters. My outfit was a bright orange T-shirt sporting the word Sense on it. Sense is a UK-based charity that cares for deafblind children. I was very happy to wear the colours of such an organisation. I also wore giant sunglasses to attract attention. These red plastic toys were nothing compared to what other runners wore: Darth Vader outfits, giant beer bottles and, yes, a 25kg tumble dryer. The kitchen appliance man (Ben Blowes) set a world record. Despite such competition I was very proud of my four-and-a-half-hour finish time.

It was a challenge to make my way through the thousands of people (there were 40 000 runners and I don’t know how many supporters). But the impressive work of road marshals and police men and women was a big help. They shepherded runners and supporters across roads, and channelled patient crowds into public transport stations. I maintained a good time, slowing towards the end, but was definitely hampered by a race-day toilet that held the promise of space-age efficiency but didn’t deliver. It gurgled through its automatic self-cleaning phase so slowly that I hopped about while waiting, anxious to return to the race.

The pace leading up to the 14-mile mark was the most stressful. I wasn’t sure I would be seen by those who knew me and I took so long to decide where the best vantage point would be that it took a hard sprint to get me there at the projected time. I must say that the timing chips given to runners and the mobile phone app they connected to were excellent when it came to tracking progress and therefore heightening excitement.

Spotting my loved ones through the crowds was hardest at the 19-mile mark and by then my calves were shaking with the effort of keeping me on my toes. But it was all worth it when we were reunited post-finish at our chosen meeting point. 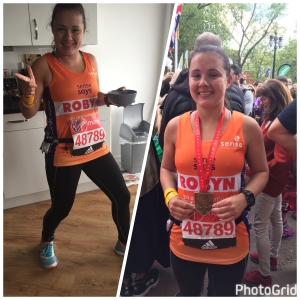 My London Marathon journey was a tiring (and expensive) one but lots of fun. I barely needed the energy bars we’d packed, so thrilling was the travel by train and by foot to the four spectator points our family had decided upon. I saw my dedicated, disciplined daughter at three of the four stops, and simply yelled her name as loudly as possible at the first as she ran past. She heard me, us, and saw us in our bright orange T-shirts, and said it really helped her to keep going for the 26 miles.

At last count Robyn had raised GBP1480.00 for her chosen charity Sense. I’m so proud of you Robyn Turton, thank you for letting me be your supporter (and for getting me a free supporter’s T-shirt)! 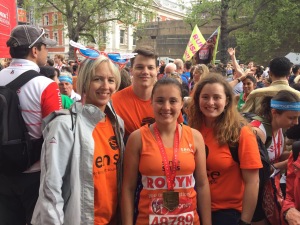 Robyn (front, centre) flanked by her supporters at the finish