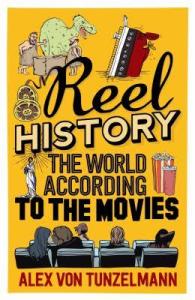 When I compare the two media of storytelling – novels and filmmaking – I have to wonder, though, why films

come in for more criticism than do books for lack or otherwise of accuracy. Perhaps it’s a matter of classification. A reader will know that when he/she is reading an historical novel that it is part-fact, part-fiction. He/she will accept the ‘suspension of disbelief’ (a theatre term) and enter willingly into the story. Author notes or history books may confirm which parts of the story are factual. If movies were categorised like books are (that is, for example, non-fiction, fiction, historical fiction) would the viewer approach movies with a similar acceptance of their levels of historical truth, as readers do books? Would they enter the ‘suspension of disbelief’ with discernment, knowing that what they are watching is a mixture of fact and fiction? At current modes of film classification (action, thriller, drama and so on), perhaps the viewer doesn’t have sufficient guidelines that what they are watching is part creation, part historical fact. But I’m being generous. Perhaps the bottom line is that we as moviegoers are so dumb that we gullibly accept as truth whatever is simply flashed across the screen at us. And we need experts like Von Tunzelmann to put us straight.

Certainly in the current climate in which ‘fake news’ is, well, making the news, learning to be discerning viewers is an important skill. And this is the vein in which I think Von Tunzelmann’s Reel History book/column could be taken. A tool to help us see when important aspects of history in movies may be inaccurately portrayed. Becoming overly pedantic about what’s true or false in movies, though, is to take away from this media’s main purpose: that of entertainment. I think Von Tunzelmann’s book inadvertently highlights this as well: that movies are NOT purveyors of truth. They are about entertainment.