Jackie: The Creation of a Fantasy

Jackie is the depiction of Jackie Kennedy’s widowing, when her husband, John F Kennedy, was shot to death right next to her in the early 1960s.

The story is very much a first-person tale, with the camera focusing on Jackie (played by Natalie Portman) or following her, to the exclusion of others, most of the time. This cloistering camera style complements the personal story conveyed. 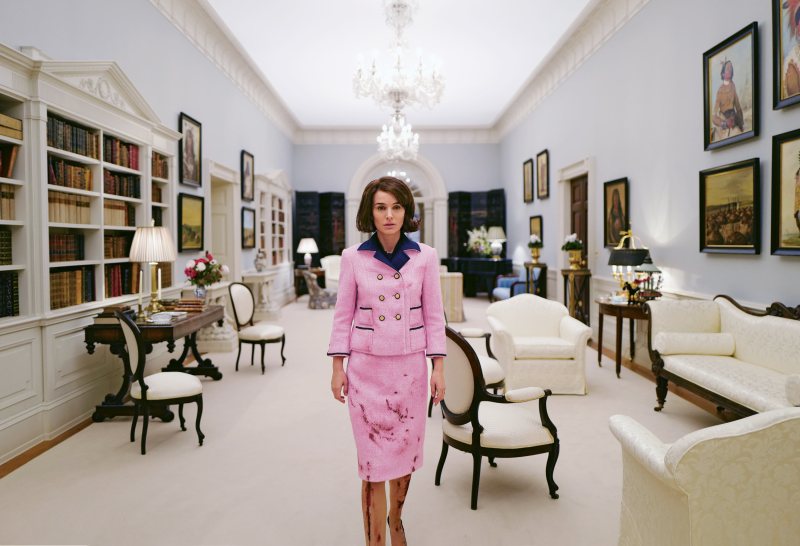 The actual tale is told in a jumbled confusion, with constant flashbacks that finally coalesce into the present. This narrative style also complements the story in that it emphasises the confusing, dynamic, disordered nature of events that followed the assassination. For instance, Jackie had to go from seeing her husband die in her lap, to identifying his body before the autopsy, seeing the next president hastily sworn in, to making decisions about his funeral, all before she had changed out of her blood-spattered pink suit.

The present-tense section of the story largely revolves around Jackie relating her version of events to a journalist (Billy Crudup) and a priest (John Hurt). Both of these characters remain nameless throughout and act almost as caricatures, or foils to reveal the real Jackie. It is with these two men that Jackie is particularly honest, revealing her desperation, her search for meaning, and her acute self-awareness.

Despite her honesty with him, Jackie edits the journalist’s story until it reflects what she wants the world to know about her and her time as first lady of the United States. In a poignant moment Jackie says, referring to the Kennedy presidency, “It was Camelot”. In other words her time in the White House was a time of beauty and fantasy, and a fiction that seemed more real and appealing than the truth.

Because of its suffocating style I didn’t enjoy Jackie until near the end when it began to make more sense. And at times I found it as jarring to watch as it was to listen to the discordant music score. But, for the reasons described above, Jackie was also an interesting film that juxtaposes fact with fiction, a film that gently questions truth and what people wanted that truth to be.

Jackie opens at cinemas in South Africa on 3 March 2017.