Garmisch-Partenkirchen is a beautiful mountainous region one-and-a-half-hours by train from Munich. It’s a well-known (think Olympics) ski resort in winter and a simply lovely walking/hiking area in summer. My husband and I dashed around Munich recently from one train station to another trying to figure out the German-encrypted directions on our maps before making it (correctly) to Munchen Hauptbahnhof in a sweltering heap. The overground train return trip was very pricy (65 Euro each) but took us through soft-green countryside, dotted with curious wooden huts and giant versions of my cuckoo clock at home. When we reached Garmisch we travelled 10 minutes on another train to the foot of the Alpspitz where we bought a cable car return journey up the mountain.

Looking across the Garmisch valley from Alpspitz. Photo: Brenda Daniels. 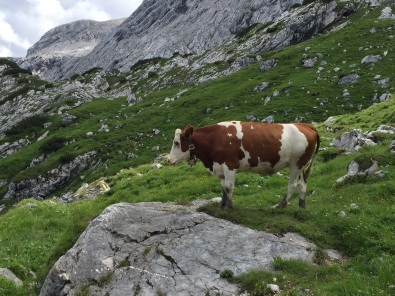 Some handsome German men joined our cable car ride bearing staggeringly huge backpacks, which, it turned out, were paragliders. At the top we got to see the pair lift off with ease and glide with their colourful chutes down the curving valley. We followed some way on foot enjoying the striated rocks, meandering hikers, and bell-clunking cows. Well, not the mildly aggressive beast that charged us at any rate. After a delicious apfelstrudel mit vanillesauce (apple strudel and custard) we decided to skip the train back to Garmisch and walk instead. The 10-minute train ride was an hour by foot and by the end I was quite jealous of the cyclists that sailed past us at frequent intervals. We arrived back in Munich tired but happily marked with a German sunglasses tan.

My brief encounter with Garmisch-Partenkirchen was fortunately not at an end. On the aeroplane back to South Africa next evening I chose to watch the film Eddie the Eagle before going to sleep. Eddie the Eagle is the true story about the very likeable Eddie Edwards (imagine calling your child that?) who, through sheer determination, became the first Briton to do ski-jumping at the 1988 Calgary Winter Olympics. And where did he first practice this thrilling sport? In Garmisch-Partenkirschen! Against the wintry landscape in the film the ski jump looked normal. Against the velvet-green hills we had just seen the ski jump looked like a giant bleached waterworld slide. Eddie the Eagle stars Taron Egerton as Eddie and Hugh Jackman as his grudging coach, Bronson Peary. It is a delightful movie. Watch it while the 2016 Rio Olympics are on. You’ll love it.