The new Ghostbusters is virtually a mirror image of the 1984 movie of the same name, minus the great soundtrack. Which is a pity. Perhaps due to licencing agreements only instrumental snatches of the original song form a backdrop to the new version. Without the song the new Ghostbusters isn’t spectacular. It seems a trifle silly. And perhaps because of more sophisticated special effects it may even be scary for very small children. 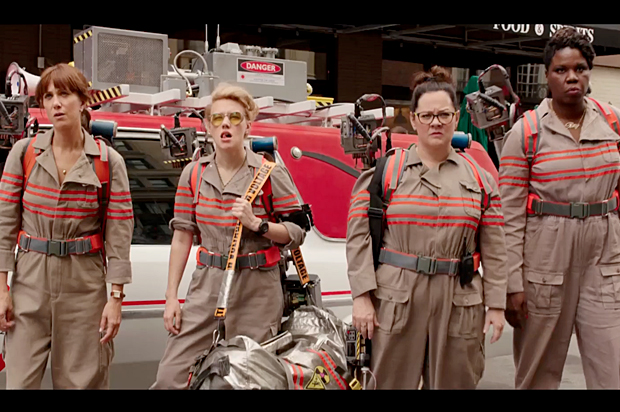 In the 2016 rendition a three-woman team comprise the ghostbusters unit, while the dumb secretary is played by a man (the lovely Chris Hemsworth with an Australian accent). The setting is of course New York – site (it seems) of most Hollywood natural disasters, alien invasions and apocalyptic wars. The ghostbusters (Melissa McCarthy, Kristen Wiig and Kate McKinnon) form an uneasy alliance, are fired from their jobs at a university for being “unscientific”, and set up a business investigating and capturing the paranormal. A weirdo with a chip on his shoulder releases a fraid of ghosts and the ghostbusters have to tackle the deluge of flying apparitions. The ladies’ transport is a converted hearse (as in the original movie) and several of the actors from the first film make an appearance in this one (Bill Murray, Sigourney Weaver, Dan Aydroyd, Ernie Hudson).

I didn’t much care for the dance scene at the end featuring Hemsworth as the lead; too reminiscent of other super hero movies. Although mostly fun to watch, I think a remake of the original with updated PC characters just doesn’t quite work. On the plus side humour, strange gooey stuff and nerdy characters all make for lighthearted entertainment rather than horror.

Ghostbusters opens at cinemas in South Africa in 2D, 3D and Imax on Friday 29 July 2016.