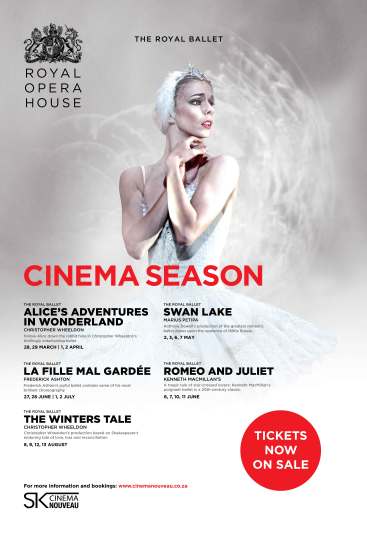 Alice’s Adventures in Wonderland comes to the big screen in the form of a ballet. The screening is to be the first of five ballets filmed by The Royal Opera House’s Royal Ballet in London and shown at Cinema Nouveau in South Africa. The other four include Romeo and Juliet, Swan Lake, La Fille Mal Gardee and The Winter’s Tale.

If you’re a ballet novice like me you will find Alice’s Adventures in Wonderland an accessible show. It’s delightfully bright and comical with an easy mix of graceful dance and descriptive play acting. This children’s tale by Lewis Carroll is well suited to the imaginative treatment given it. I found it a happy escape from the outside world.
Alice’s Adventures in Wonderland is on at Cinema Nouveau in Umhlanga, Johannesburg, Pretoria and Cape Town on Saturday 28 March at 2.30pm, Sunday 29 March at 2.30pm, and on Wednesday and Thursday 1 and 2 April at 7.30pm. Shows (in Umhlanga anyway) continue despite load shedding!